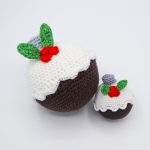 These Christmas baubles are easy and fun to make. You can vary in color and in sizes by using different yarn and different hook sizes. This pattern written in US terms gives you two variations. This pattern is also included available in pdf download with 3 other designs. Available on Etsy and Ravelry.

-Use stitch marker to mark beginning of rnd.

-Unless stated otherwise, work into both loops of stitch.

-Pieces in the round are worked in a continuous spiral.

-Change colour on last pull through of last stitch in previous colour.

–The large baubles are worked with 2.5mm hook and scheepjes Catona & Twinkle.

–The small baubles are worked with 1.25mm hook and scheepjes Sweet Treat.

-The Sweet Treat yarn have the same color numbers as Catona. For Twinkle, replace with 618 Silver and 154 Gold.

– Fill the baubles firmly with toy filling while you go.

Fasten off, weaving in end.

Fasten off, weaving in end.

With red make a mr.

Fasten off, leaving end to sew holly and berries to pudding,

Fasten off, leaving end for sewing.